Fiber optic attenuators are devices which reduce (attenuate) the strength of a fiber optic signal within a fiber optic network. Attenuators are usually used when the signal arriving at the receiver is too strong and hence may overpower the receiving elements. This may occur because of a mismatch between the transmitters/receivers (transceivers, media converters), or because the media converters are designed for a much longer distance than for which they are being used. Sometimes attenuators are also used for stress testing a network link by incrementally reducing the signal strength (increasing the dB attenuation) until the optical link fails, thus determining the signal’s existing safety margin.

A fiber optic attenuator is a passive device used to reduce the amplitude of a light signal without significantly changing the wave form itself. This is often a requirement in Dense Wave Division Multiplexing (DWDM) and Erbium Doped Fiber Amplifier (EDFA) applications where the receiver cannot accept the signal generated from a high-power light source.

If the power is too high as it often is in short single mode systems with laser transmitters, you can reduce receiver power with an attenuator. The power reduction is done by such means as absorption, reflection, diffusion, scattering, deflection, diffraction, and dispersion, etc. Optical attenuators usually work by absorbing the light, like sunglasses absorb extra light energy. They typically have a working wavelength range in which they absorb all light energy equally. They should not reflect the light or scatter the light in an air gap, since that could cause unwanted back reflection in the fiber system. The attenuating fiber is produced by using a solution doping technique to introduce transition or rare earth elements into the fiber’s core. The dopant reduces the transmission of the fiber. The degree of attenuation depends upon the material used as the dopant, the dopant level, and the length of the attenuation segment.

Optical attenuators can take a number of different forms and are typically classified as fixed or variable attenuators. What’s more, they can be classified as LC, SC, ST, FC, MU, E2000 etc. according to the different types of connectors.

Fixed optical attenuators used in fiber optic systems may use a variety of principles for their functioning. Preferred attenuators use either doped fibers, or mis-aligned splices, or total power since both of these are reliable and inexpensive. Inline style attenuators are incorporated into patch cables. The alternative build out style attenuator is a small male-female adapter that can be added onto other cables.

Non-preferred attenuators often use gap loss or reflective principles. Such devices can be sensitive to: modal distribution, wavelength, contamination, vibration, temperature, damage due to power bursts, may cause back reflections, may cause signal dispersion etc.

Loopback fiber optic attenuator is designed for testing, engineering and the burn-in stage of boards or other equipment. Available in SC/UPC, SC/APC, LC/UPC, LC/APC, MTRJ, MPO for singlemode application.900 um fiber cable inside of the black shell for LC and SC type. No black shell for MTRJ and MPO type.

Attributes of merit for electrically controlled devices, include speed of response and avoiding degradation of the transmitted signal. Dynamic range is usually quite restricted, and power feedback may mean that long term stability is a relatively minor issue. Speed of response is a particularly major issue in dynamically reconfigurable systems, where a delay of one millionth of a second can result in the loss of large amounts of transmitted data. Typical technologies employed for high speed response include liquid crystal variable attenuator (LCVA), or lithium niobate devices. There is a class of built-in attenuators that is technically indistinguishable from test attenuators, except they are packaged for rack mounting, and have no test display.

What Is Fixed Fiber Attenuator? 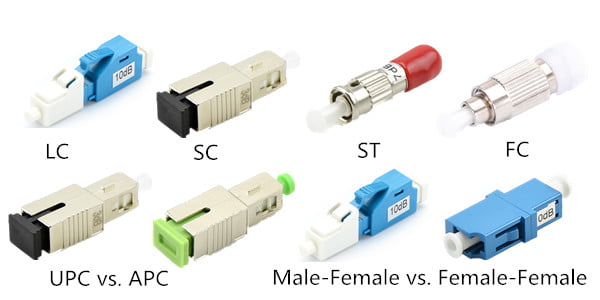 How to Use Fixed Fiber Attenuator?

As shown in the figure below, fixed fiber optic attenuators should be always installed at the receiver end of the link (X in the drawing). This is because it’s more convenient to test the receiver power before and after attenuation or while adjusting it with your power meter at the receiver, plus any reflectance will be attenuated on its path back to the source.

How to Use Fixed Fiber Attenuator 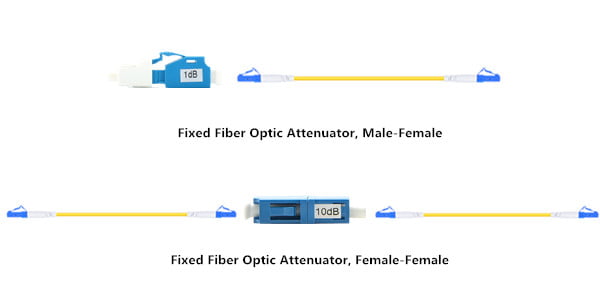 One thought on “What is Fiber optic Attenuator?”