A local area network (LAN) is a collection of devices connected together in one physical location, such as a building, office, or home. A LAN can be small or large, ranging from a home network with one user to an enterprise network with thousands of users and devices in an office or school.

Regardless of size, a LAN’s single defining characteristic is that it connects devices that are in a single, limited area. In contrast, a wide area network (WAN) or metropolitan area network (MAN) covers larger geographic areas. Some WANs and MANs connect many LANs together.

A local-area network (LAN) is a computer network that spans a relatively small area. Most often, a LAN is confined to a single room, building or group of buildings, however, one LAN can be connected to other LANs over any distance via telephone lines and radio waves.

A system of LANs connected in this way is called a wide-area network (WAN). The difference between a LAN and WAN is that the wide-area network spans a relatively large geographical area. Typically, a WAN consists of two or more local-area networks (LANs) and are often connected through public networks.

Most LANs connect workstations and personal computers. Each node (individual computer) in a LAN has its own CPU with which it executes programs, but it also is able to access data and devices anywhere on the LAN. This means that many users can share expensive devices, such as laser printers, as well as data. Users can also use the LAN to communicate with each other, by sending email or engaging in chat sessions.

LANs are capable of transmitting data at very fast rates, much faster than data can be transmitted over a telephone line; but the distances are limited and there is also a limit on the number of computers that can be attached to a single LAN.

A LAN comprises cables, access points, switches, routers, and other components that enable devices to connect to internal servers, web servers, and other LANs via wide area networks.
The rise of virtualization has also fueled the development of virtual LANs, which enable network administrators to logically group network nodes and partition their networks without a need for major infrastructure changes.
For example, in an office with multiple departments, such as accounting, IT support, and administration, each department’s computers could be logically connected to the same switch but segmented to behave as if they are separate.

What are the benefits of a LAN?

The advantages of a LAN are the same as those for any group of devices networked together. The devices can use a single Internet connection, share files with one another, print to shared printers, and be accessed and even controlled by one another.
LANs were developed in the 1960s for use by colleges, universities, and research facilities (such as NASA), primarily to connect computers to other computers. It wasn’t until the development of Ethernet technology (1973, at Xerox PARC), its commercialization (1980), and its standardization (1983) that LANs started to be used widely.
While the benefits of having devices connected to a network have always been well understood, it wasn’t until the wide deployment of Wi-Fi technology that LANs became commonplace in nearly every type of environment. Today, not only do businesses and schools use LANs, but also restaurants, coffee shops, stores, and homes.
Wireless connectivity has also greatly expanded the types of devices that can be connected to a LAN. Now, nearly everything imaginable can be “connected,” from PCs, printers, and phones to smart TVs, stereos, speakers, lighting, thermostats, window shades, door locks, security cameras–and even coffeemakers, refrigerators, and toys

Are there different types of LANs?

In general, there are two types of LANs: client/server LANs and peer-to-peer LANs.
A client/server LAN consists of several devices (the clients) connected to a central server. The server manages file storage, application access, device access, and network traffic. A client can be any connected device that runs or accesses applications or the Internet. The clients connect to the server either with cables or through wireless connections.

Typically, suites of applications can be kept on the LAN server. Users can access databases, email, document sharing, printing, and other services through applications running on the LAN server, with read and write access maintained by a network or IT administrator. Most midsize to large business, government, research, and education networks are client/server-based LANs.
A peer-to-peer LAN doesn’t have a central server and cannot handle heavy workloads like a client/server LAN can, and so they’re typically smaller. On a peer-to-peer LAN, each device shares equally in the functioning of the network. The devices share resources and data through wired or wireless connections to a switch or router. Most home networks are peer-to-peer.

There are many different types of LANs, with Ethernets being the most common for PCs. Most Apple Macintosh networks are based on Apple’s AppleTalk network system, which is built into Macintosh computers. The following characteristics differentiate one LAN from another:

Topology: The geometric arrangement of devices on the network. For example, devices can be arranged in a ring or in a straight line.

Protocols: The rules and encoding specifications for sending data. The protocols also determine whether the network uses a peer-to-peer or client/server architecture.

Media: Devices can be connected by twisted-pair wire, coaxial cables, or fiber optic cables. Some networks do without connecting media altogether, communicating instead via radio waves. 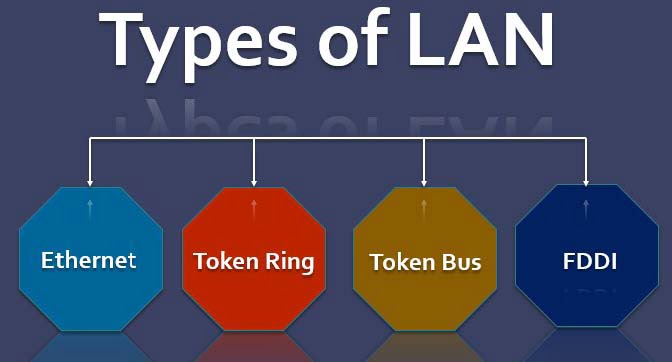