Fiber optic connectors are used to the mechanical and optical means for cross connecting fibers. Fiber optic connectors can also be used to join fiber cables to transmitters or receivers. There have been many types of connectors developed for fiber cable. Single mode networks have used FC or SC connectors in about the same proportion as ST and SC in multimode installations. But LC connector with smaller size and higher performance has become popular and the connector choice for optical transceivers for systems operating at gigabit speeds. The following text gives a detailed introduction of LC connector.

LC stands for Lucent Connector, as the LC connector was developed by Lucent Technologies as a response to the need by their primary customers, the telcos, for a small, low insertion loss connector. Then the LC design was standardized in EIA/TIA-604-10 and is offered by other manufacturers.

LC connector can be found in many places for termination and connection, especially SFP transceivers for gigabit transmission. For example, the optic interfaces of Cisco SFP transceivers are all LC connectors. Some other applications are as following:

What Is an LC Fiber Connector?

The LC connector is a small form factor (SFF) connector, which is designed to join LC fibers where a connection or disconnection is required. The LC connector was first developed by Lucent Technology for TelCo environment uses. Hence, LC stands for Lucent Connector mostly. In addition, LC can also stand for Little Connector and Local Connector. These LC connectors utilize traditional components of the standard connector but with a 1.25mm ceramic ferrule. 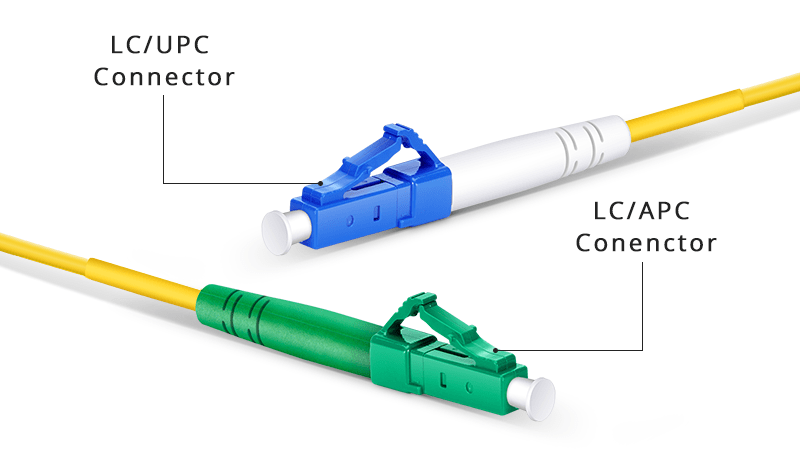 What Are the Advantages of LC Fiber Connector?

Nowadays, LC fiber optic connectors are very popular in the market. The following are several advantages of LC connector:
With LC connector, the cost of the system can be reduced. LC connector is half the size of the traditional SC connector. Therefore it can doubles fiber density in shelves and outlets.
The polarized feature of LC connector helps maintain the transmitting or receiving direction and assures high repeatability.
LC connector has an anti-snag latch, which can improve durability and reduce the rearrangement work caused by the cross connection.
It is time-saving for installation, because there is no need to install the field mountable connectors.

What Are LC Fiber Connector Types?

LC connectors have single mode and multimode tolerances. The polishing types of the LC connector are available in UPC and APC. LC APC fiber connector has an eight-degree angle to minimize back reflection and can be recognized by its green colored housing and strain relief boot. While LC UPC fiber connector can be easily recognized by blue color. Generally, two versions of LC connectors are available: jumper connector and BTW connector.
The jumper connector can be used to terminate simplex and duplex 1.6 to 2.0 mm cordage. It is convenient to engage and disengage because of a trigger and the standard latch. What’s more, jumper connector is intended for use in LAN, central offices, and in patch cords for premise distribution systems.
The BTW (behind-the-wall) connector is a shorter version of the LC intended for mounting on 0.9 mm fiber. It is typically utilized on the back side of equipment. Besides, BTW connector usually uses finger catch and extended latch, which makes the BTW connector engage and disengage easily.

What Is LC Uniboot Connector? 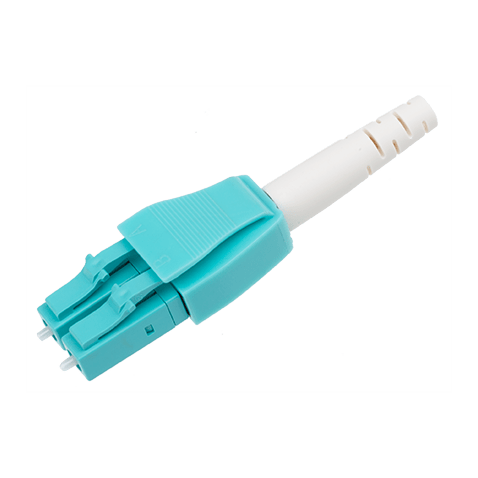 LC Secure Lockable Fiber Optic Connector LC stands for Lucent Connector, as the LC connector was developed by Lucent Technologies as a response to the need by their primary customers, the telcos, for a small, low insertion loss connector. Then the LC design was standardized in EIA/TIA-604-10 and is offered by other manufacturers.

What Is LC Push-Pull Uniboot Connector?

LC Push-Pull Uniboot Connector connector that come with a Push-Pull tab, which can be used in a high density environment. Comparing to the conventional duplex connector, the design is more compact, as well as just one cable was used, which help to improve the hot air flow in a high density and a crowed environment.  an unique and a patented design to reach in a highest density in the industry.

What Is LC Duplex Connector?

LC adapter is designed to work together with the complete LC fiber optic family to offer an optimal, high-density solution for the network. It features a self-adjusting mechanism, which accommodates patch panels of thickness between 1.55 to 1.75 mm. And it is available in single mode, multimode, simplex and duplex options. LC simplex adapter connects one LC connector pair in one module space. While LC duplex adapter connects two LC connector pairs in one module space.

LC fiber cable with two LC connectors terminated on either ends, is the most commonly used fiber optic cable type. The LC connector used on the LC fiber cable has a trigger mechanism,  which allows the connector to be easily engaged and disengaged.

LC attenuator uses LC connector, which is a commonly used LC-related device as well. It is used in fiber optic communications to reduce the optical fiber power by a certain level. Usually, it has a male plug connector on one side, and has a female fiber optic adapter on the other side. In addition, its typical attenuation values are between 1 and 30 dB.

One thought on “Fiber Optic LC connector Definition and Types”